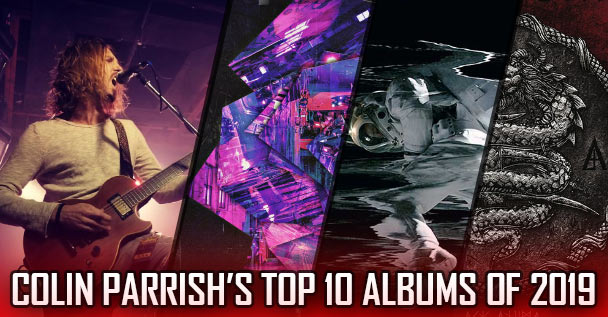 Part of me wishes I had been asked to provide this list last year – my Apple Music “recently added” list is still living mostly in 2018. Regardless, there were some beautiful, heavy records released in 2019. Here is my list in no particular order with a little bit of added color.

10. After The Burial – Evergreen

The metal anthem of 2019 has to be “Behold The Crown”. The opening pinch harmonic riff is a real once-in-a-lifetime kind of discovery for a guitar player – the kind of riff that you want to play over and over for hours and never gets old. Past “Exit, Exist” the remainder of the record isn’t quite as deep as 2016’s “Dig Deep” but Evergreen makes the list for those first two bangers.

For me, Devin Townsend’s work sits in a category all its own within modern metal. His catalog is so eclectic and that he can get away with nearly anything and it still sounds distinctly “Devin Townsend”. Empath gets a little too soundscapey for my tastes at times but Devin’s songwriting and choral arrangements are beautiful enough to keep your attention throughout.

Happened to catch Crystal Lake on tour with August Burns Red and they stole the show. Ryo Kinoshita’s scream and stage presence is hysterical. Helix is nearly as heavy as the live show but it’s absolutely worth seeing Crystal Lake if you can catch them when they’re on tour outside of Japan.

One of the modern metal drumming heavyweights, Anup’s incredible groove sensibility is on full display on this record. Illuminate marries punchy drum and bass with melodic pop hooks and features different vocalists on each track. Anup is a really nice guy to boot – always available on social media for mix insights which I know I certainly appreciate.

After spending the summer on tour with these Swedes, I can’t figure out why Evergrey isn’t a household name within the melodeath community alongside their Gothenburg contemporaries. They are absolute masters of their craft. A true songwriter, Tom infuses The Atlantic with haunting melodies that translate into anthematic choruses for live audiences. And though the record is mixed more towards the progressive end of the spectrum, they are disgustingly heavy live. If you ever have the opportunity to see Evergrey on tour, it’s worth going if you’re brand new to their material – they will blow you away.

While a single doesn’t exactly qualify as an album, if you haven’t heard about Orbit Culture yet then you need to go listen to Nensha and 2018’s Redfog immediately. Niklas’ mix on their material is utterly bone crushing. Couple that with Swede writing sensibility, Orbit Culture is going to be a big deal for years to come.

These guys were brought to my attention by our videographer (Alex “The Trenches” McFarland) while we were on tour this past summer. Australian deathcore that’ll tear your head off. The mix on this record is what does it for me – it’s the perfect combination between that tight modern sampled sound with just enough looseness in the guitars to make it feel live and energetic.

Hung out with these guys a few months ago and got to listen to a few tracks of this record from backstage. The FOH subs were shaking the floor – it was insane. They really knocked it out of the park with this record. I hadn’t been a Lacuna Coil superfan before this record, but I am now. Maki’s mix on the record is insanely bottom heavy which I love, the riffs are modern and djenty and you can listen to the whole record front to back. One of the best of the past decade for me.

What a record. The songs are full of spacey synths and soaring melodic hooks. Nathan Bulla’s drumming is mental. But the real standout is the mix. Jordan Valeriote and I go all the way back to the local scene in Ontario Canada, and in my opinion, he’s become the best mix engineer for modern metal, full stop. This record sounds like a real band playing real instruments with robotic precision. Jordan manages to find space for everything which is especially hard with 7 and 8 string guitars and dozens of layers of synths. Another record that’s great to listen to front to back.

Okay it’s not metal, but this music in this movie broke me. Richter is becoming a real titan in the filmscore world and his neoclassical orchestrations with brooding synths on this soundtrack are so ominous and dark, they deserve a place on this list. Watch the movie if you haven’t seen it. Then listen to the score while you’re driving late alone late at night and hope you don’t get abducted by aliens. Don’t be surprised if some of the themes from this score find their way into your subconscious.