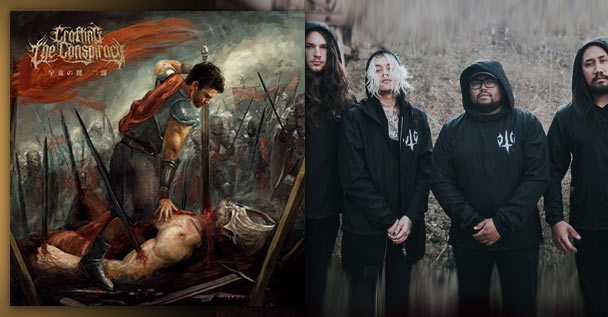 2020 just got more interesting… When they’re not crafting up conspiracies, this band is crafting some high-end Melodic Death Metal to bash in the collective skulls of listeners. If you consider yourself to be a fan of this particular style of metal, definitely give Crafting The Conspiracy a spin as soon as possible!

Speaking of which, an all new single by the name of “Cosmic Key III Dream Sequence” just landed! You can give it a listen right here, right now!

Hailing from Texas, this is a four-man band blasting out a massive sound. Fans of bands like The Black Dahlia Murder will likely find something to love here. CTC have, likewise, been hard at work for several years making their mark in the metal underground. They’ve been smithing their particular brand of metal since 2014 and their efforts just landed them a spot at Innerstrength Records.

It’s also worth mentioning that, despite all the setbacks brought about in 2020, Crafting The Conspiracy have kept their heads up while moving full steam ahead on multiple endeavors. Their efforts are certainly admirable.

Last year, we donned our tin foil caps and dug into the release of CTC’s “The Cosmic Key Pt I” (CLICK HERE to read that and listen to the record). It served up a great, bloody slab of melodeath and we reacted in kind…

Now, the time has come for a second serving! The band is currently on the precipice of releasing an all new EP and the soul follow up to last year’s offering with the appropriately titled “The Cosmic Key Part II”! This marks the band’s first official release through their newfound home at Innerstrength Records. It will officially strike on August 28th with pre-orders currently available to those who CLICK HERE and pre-save options available HERE.

Now, let’s dig into this particular conspiracy… Does it hold weight or come off like the nonsensical ramblings of a madman? Let’s find out!

The record opens with the compliments of Hanging The Nihilist pianist Berry’s tickling of the keys, easing listeners into the experience before lopping off ears with the sharpened metal edge! This provides an interesting and dynamic duality off the bat, displaying the band’s more melodic and heavy sides back-to-back. Though, all in all, it’s safe to expect more heft than not. The band barrels in with a pure metal assault worthy of some horns pointed to the sky. It’s safe to mark this as a solid introduction as it shows what listeners can expect from the record without giving away the whole recipe.

In terms of the record as a whole, I’d say that every track has something special to offer. There are ripping solos, unexpected guest spots (okay, I had some idea after recently interviewing the band – CLICK HERE TO READ!) which included Michael Alvarez of Flub, Jamie Hanks of I Declare War and Christina Rotando, an instrumental number that sounded very much akin to Fallujah material, and just all around quality angles to the type of metallic, melodic brutality that CTC is known for providing.

Instrumentally, the band continues to bring a high-level performance to the table with their ability to venture in a number of directions under the melodeath umbrella. While it generally propels the project in a consistent direction, there’s plenty of intrigue and dynamic play to be found around the corners of this record. Not to mention the talent! After revisiting the band’s previous record – I noted some growth in the exhibition of skill on “The Cosmic Key Part II”.

Vocally, CTC has, likewise, always been impressive. Rhythmically sound, spitfire delivery reigns across this record with a nice range to boot. Multiple approaches are employed through the record from the growls and highs to some well-executed pig squeals and even a touch of tunnel throat technique on later numbers. The guest spots also help to keep listeners on their toes.

When it comes to the production on “The Cosmic Key Pt II”, this is a crisp, well-polished record. Every instrument shines through the distorted wall to crush listeners in kind. No qualms here.

In terms of criticism, I don’t have much to say. This is a clear step ahead for the evolution of the band. One of my main criticisms on the last review was the band lacks a sound that they can truly call their own despite executing it very well. That’s still true to an extent but, this go around, I noticed some more distinct features to help them stand out from the pack.

Final verdict on the conspiracy theory… This is a great EP! I would say it takes the same mission from the previous record and bumps things a step further in the right direction. It takes the previous elements and makes them better while adding more approaches and showing an overall positive trajectory for CTC. So… you’ll need more tin foil for this one with a well-deserved 8.5 out of 10!

Once again, you can enjoy the new single on this page and check the pre-orders which are currently available to those who CLICK HERE and the pre-save options which are available HERE.

Also a reminder, you can also learn more about this record by reading our recent interview with the band.

In support of the new record, the band is prepping to embark on a southern tour of the United States! Due to COVID-19 the dates are still in question but you can learn more about that by CLICKING HERE.