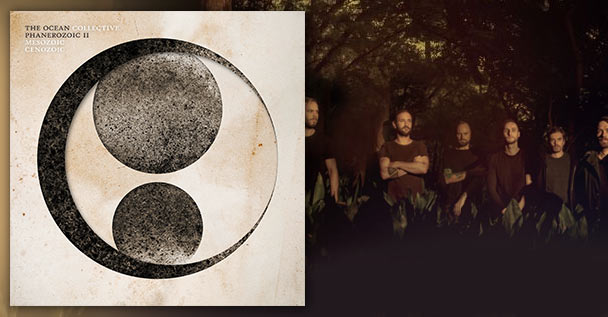 Background: 2 years later… The highly anticipated follow-up has arrived! “Phanerozoic I: Palaeozoic” was a critically acclaimed, conceptual project from The Ocean and they’ve come to give the beast a promised sequel with “Phanerozoic II: Mesozoic | Cenozoic”. For those who are uninitiated, The Ocean is a bit of an Avant-Garde German Post-Metal / Progressive Metal band with no less than 6 members and enough talent to shift a continent. They’ve been at it since the early 2000s, releasing a total of 8 full-length efforts in that time. Their latest contribution to music just rose out of the ocean waters (aka Metal Blade Records) today! Care to go for a swim?

This Album Sounds Like: An adventure for your ears… This is ultimately the continued evolution of an already brilliant band doing further brilliant things with their musical efforts… Following their ever-growing vision to a fine point, one can watch the music weave and take magnificent form through wonderful phases worthy of celebration. In short, it’s safe to expect conceptualized greatness from The Ocean once again with their delivery of “Phanerozoic II: Mesozoic | Cenozoic”.

Some Favorite Tracks: All o’ em. “Phanerozoic II: Mesozoic | Cenozoic” is the type of album that’s meant to be experienced from front-to-back as it all compounds in a manner that’s just epic as hell. Of course, I have to name drop the 13 and a half minute, brass blaring epic “Jurassic | Cretaceous” sticking out like a sore thumb with a guest spot from no less than Katatonia singer Jonas Renkse. There are unexpected twists and surprises a plenty in this track list!

Positives: The whole album proves to be a positive. This is high end instrumental brilliance with a fine control of composition, pace and tension. There are innovative and interesting passages laid in and waiting for your ears… So go find them! The sound translates beautifully, and every member delivers a standout performance for a multitude of reasons. This is a cohesive and highly talented band of musicians once again doing what they do best. Praise. Praise. Praise. Just listen to the damn thing already!

Negatives: At worst, I didn’t like some of the more sterile clean vocals… For example, the repetitive bits of “Triassic”. That’s it. That’s my only real criticism and it’s entirely subjective.

In The End… Ready for a non-surprise verdict? “Phanerozoic II: Mesozoic | Cenozoic” is another job extremely well done from the boys in The Ocean. I would highly recommend this album to any and all fans of modern and innovative Post-Metal / Progressive Metal. This is at least a 9 out of 10. Easy.