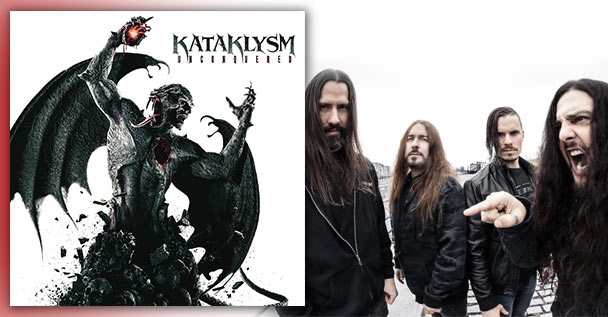 Background: Canadian Death / Melodeath band Kataklysm have been steam rolling out metal music for nearly 30 years now! Their inception in the early 90s has brought about a total of 14 full-length album releases composed of direct and driving metal music which has built them a loyal following and currently has them placed at no less than Nuclear Blast. Never ones to rest, they’ve just released a new album “Unconquered” to follow up their previous 2018 effort “Meditations”. We’re about to take a stab at this album and see if the band remains unconquered following its release… which is today!

This Album Sounds Like: Being crushed under the treads of a tank and having a medic attempt to help you right afterwards (unsuccessfully… this is Death Metal after all). Kataklysm diligently combines their heavier influence with the melodic sensibilities they’ve turned towards as their careers have progressed. It also comes with striking, modern tonality and quality production to ice the cake.

Some Favorite Tracks: This is a very consitent album so… If you like one track, chances are you’ll like them all. Ones that stuck for me would be the opener / single “The Killshot”, “Stitches”, “Defiant” and “Icarus Falling”. However, as stated, they’re all worth a go.

Positives: METAL! And lots of it. Kataklysm are here to (delightfully) drag your ears over miles of debris as they weave a path of destruction through this record. The instrumentalists all bring a pulverizing, high level performance to the table with this one. I also think its notable that the record was, once again, recorded and engineered by the band’s guitarist and producer JF Dagenais with additional mixing help from no less than Colin Richardson (Carcass, As I Lay Dying, Napalm Death, Trivium, etc). All of this is to say “Unconquered” sounds crispy!

Negatives: Despite some outlying tracks like “Icarus Falling”, this album is consistent to a fault. It can all kind of bleed together while listening from front-to-back. Also, while technically good in terms of delivery, the growling vocals add to this effect by being sort of one dimensional. It’s also a bit short lived in the grand scheme of things, standing at 9 tracks and 38 minutes.

In The End… It’s safe to say that Kataklysm have delivered another good metal album for their discography. I wouldn’t say this is greatness but it’s certainly an enjoyable listen for metalheads. To sum things up, I’m feeling a 7 out of 10 for “Unconquered”. And with that… Kataklysm does, indeed, remain unconquered! Horns up to this one.