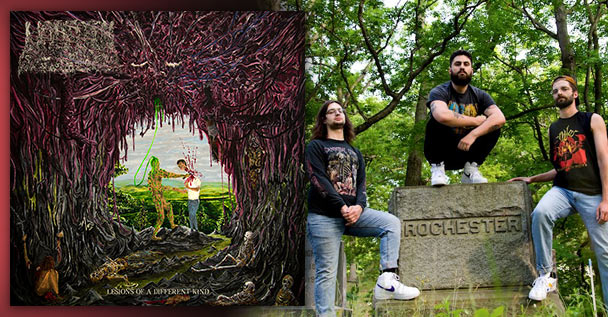 Background: Undeath is a new name in the league of Death Metal music but they’re already primed to make an impact. Hailing from the northern, rotting darkness of Rochester, New York their 2019 demos and “Sentient Autolysis” release left the ears of many Extreme Metal fans impressed. Under the greater umbrella of Death Metal, Undeath seem to be taking things in a gnarly OSDM direction and we’re here for it. Now, having inked a deal with the mighty Prosthetic Records, Undeath are primed to deal much more damage with their first full-length album by the name of “Lesions Of A Different Kind”. This is set for release on October 23, 2020 and already appears to be heating up quite a bit in the metal underground. As of the writing of this review, it’s on the front page of the metal section on Bandcamp and ended up in our e-mail for seemingly good reason. Now, let’s grab a scalpel and dissect this undead behemoth!

This Album Sounds Like: A pile of gore that will instantly twist one’s face into a grimace of disgust. It’s like a pile of picked skulls being ground to dust under the treads of a tank with the name UNDEATH painted on its sides… in blood of course. What more can I really say? This shit is BRUTAL.

Some Favorite Tracks: The record spares no time beheading listeners with the suitably titled “Suitably Hacked to Gore” as an opener. Things only progress from there with numbers such as the title track itself, “Entranced by the Pendulum”, “Archfiend Coercion Methods” and “Lord of the Grave” leaving a mark. Not to mention “Kicked in the Protruding Guts” which is not only an absolute banger but an apt description for how this whole album plays out. However, they’re all worthwhile for a number of reasons. If you like Death Metal, you’ll likely find something to enjoy with all of these tracks.

Positives: If you enjoy the approach of Old School Death Metal, this is a solid candidate for your playlist. The band does a great job of pulverizing everything you hold dear with their ruthlessly brutal approach to Extreme Metal music. There are also some intriguing moments that break from the overall consistency of this record like any of the guitar solos from the opening track onwards or the absolute control of timing on “Entranced by the Pendulum” among other tracks. It’s worth noting that this band is incredibly tight and some of the riff and drum combos they produce are nothing short of excellent. There’s massive amounts of groove here. The more I listen, the more impressed I am.

Negatives: For the most part, don’t expect this album to reinvent the blood-spattered Death Metal wheel but do expect it to crush you in a favorable manner. If you don’t like being crushed by sound, this record may not be your cup of blood steeped tea. Furthermore, the record can be consistent to a fault but sometimes you need to blast brutal shit to get you through the day, dammit! Also, I know the band was going for a raw production style for the whole ODSM approach, but I personally think it could’ve popped out a bit more – that’s merely my preference though. Once again, I understand where the band is coming from.

In The End… Did I mention this record is brutal? I’m just beating a dead horse now… Damn, that just sounded like another reference to this album’s brutality. In all seriousness though, I believe there’s A LOT of potential for Undeath in this field of music and I have a feeling they’re merely getting started. To bring about a final verdict, I think this one deserves at least an 8 out of 10. Well done, Undeath. Very well done.