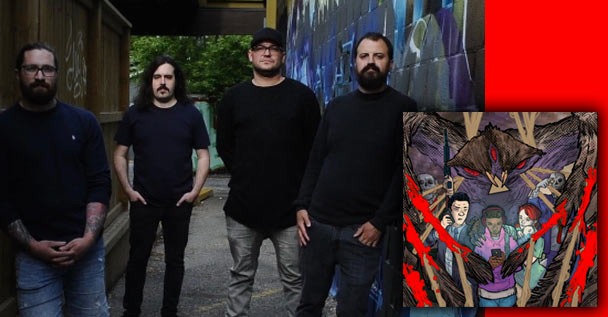 Illuminated Minerva are ready to release their new album “Enigma Adamantine” this Friday! However, as it stands, you won’t have to wait another minute to give this beast a listen. Stream the album right here, right now:

Illuminated Minerva is a technical, progressive metal band, from Calgary, Canada. Brothers Nathan Bourgeault (guitar) and Jordon Bourgeault (drums) were both musicians growing up and eventually started their first project Sequoia, the beginning of their musical collaboration. Eventually, they moved on to form Illuminated Minerva, with a goal to push the musical boundaries further.

Rounding the lineup out is local scene veteran Matt Petti (bass) who played with drummer Jordon Bourgeault in Verbal Deception; and Pat Lawtey (guitar) who played with the international act Kobra and the Lotus.

The bond between brothers and former bandmates results in a very natural writing process for the progressive metal quartet. Knowing what works and what doesn’t comes easily and allows the band to intertwine astral riffs, and technical harmonies highlighted by the absence of vocals. Combined with archived audio clips the result is oratory artistic storytelling taking the listener through space and time, exploring conspiracies and unanswered questions.

With a captivating and visceral live show, the seasoned musicians of Illuminated Minerva have played with a host of bands locally including Tesseract, Intronaut, and Cloudkicker. In 2014, the band released their debut EP “The Immaculate Deception” and are following it up in 2020 with a full length “Enigma Adamantine” due out Sept 25th.

The album described as a whole:

ENIGMA ADAMANTINE is an instrumental progressive metal album based around conspiracy, ufos, and abductions. A musical examination of modern mythology laid out with hard-hitting bass grooves, technical guitar lines, soaring leads, and complex drumming matched with audio from years past present an auditory mirror reflecting our deepest fears and questions yet to be answered. An album experience as unique as the stories within.

1. Heart Beat of Creation: Opening up ENIGMA ADAMANTINE with a universal bang, THE HEARTBEAT OF CREATION sets the tone of the album with monstrous grooves and spacey cleans matched against the backdrop of extraterrestrial human origins and universal creation.

2. Sightings: SIGHTINGS is the track for those who ‘want to believe’! Odd time signatures, throbbing bass and first hand accounts of unknown aircraft frame the question of are we alone.

4. Wilder (Mother Goddess): An onslaught of technical brutality set to a narrative of biology, reptilian beings and ritual. Slithering guitar, ancient rhythms and ripping bass cut deep in this track.

5. Illuminatus Majoris: The capstone of the album brings beautiful, melodic progressions weaving a web of power, greed, and corruption. Building into a powerful climax, searing leads and a explosive outro close out the album… although a final message remains.

1. Nathan and Jordon are brothers, and artists. Jordon runs his successful airbrush shop ‘Jbo airbrush’, Nathan is the creator and artist of his graphic novel ALLBLACK and has created all of the album, logo, and T-shirt art for both Illuminated Minerva albums.

2. Jordon was in another Calgary band called Verbal Deception. When they started searching for bass players they recruited Matt Petti. After being in a band together for a while, Jordon asked Matt to join Illuminated Minerva when he and Nate began the original line up.

3. Both Illuminated Minerva albums have been recorded, mixed and mastered with ALAN SACHA LASKOW at PERFECT FILTH STUDIOS.