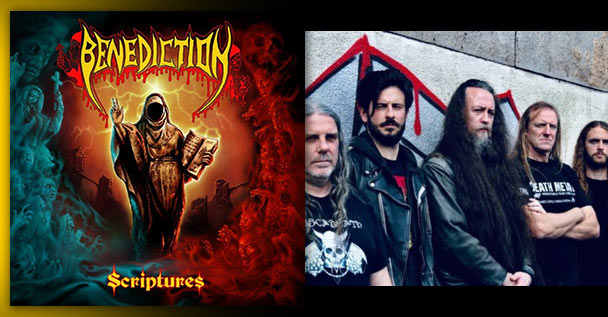 Background: Take me to church. It’s been 12 years since we got an album from UK Death Metal heavy hitters Benediction. They’ve been releasing music for over 30 years now! Their latest (and 8th) album goes by the name of “Scriptures” and aims to steamroll ears over the globe. This was released through the juggernaut Nuclear Blast Records today! The band is still driven by it’s primary line-up with Darren Brookes and Peter Rew on guitars along with the return of Dave Ingram providing growls as previously seen on records like “Transcend The Rubicon” (fun fact though – Napalm Death vocalist Mark “Barney” Greenway was the original voice of Benediction). They’re now joined by drummer Giovanni Durst (Monument, Omicida) and bassist (Omicida) to dominate some ear drums. Let’s see how these scriptures read…

This Album Sounds Like: A consistent pummeling of the skull. The glorious return of champions in the blood soaked Death Metal realm. What’s not to like?

Some Favorite Tracks: “Iterations of I” immediately had me headbanging, “In Our Hands, the Scars” was an absolute monster, “Stormcrow” and “Rabid Carnality” were worthy singles, and “Progenitors of a New Paradigm” has a cool feature from Kam Lee (Massacre, ex-Death). Ultimately, if you like this band’s approach to Old School Death Metal, you’ll enjoy all of these tracks.

Positives: The return of a classic metal band is always a worthwhile event and Benediction fits the bill. This is solid UK Death Metal through and through. It’s interesting to hear them function with the new members and ultimately everyone gets to shine with standout performances as the instrumentals lurch us around. I enjoyed the hint of an ominous atmosphere across some of these tracks and the infusion of some nice melodies, especially surrounding the guitar solos (no, it’s no melodeath-y). To wrap things up, producer Scott Atkins (Cradle of Filth, Savage Messiah, Sylosis) makes this record sound pristine but not in a way that’s over-produced.

Negatives: Things can be a bit consistent to a fault at times – especially with the vocals – but I honestly didn’t expect otherwise so take it or leave it. Objectively, this doesn’t truly break down any walls, functioning rather as a classic style album, and it won’t be everyone’s cuppa’ tea but it’s a great OSDM sound all in all.

In The End… There will be blood and Benediction. I’m punching in an 8 out of 10 for this new reading of the Death Metal “Scriptures”. It’s a great return from a classic band and my ears are here for it. If you’re looking to have your skull pummeled repeatedly, give a listen to any of the tracks above on this page or find the goods on your favorite music platform. Let there be some DAD GUM METAL \m/