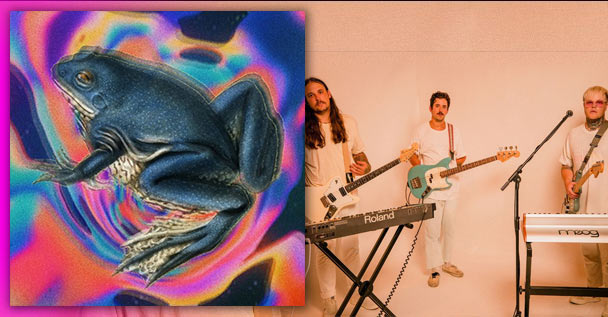 Background: Hailing from the beaches of South Carolina, Hundredth have put forth a wide variety of music in the past decade. To be specific, they’ve launched 5 albums to date with the latest going by the name “Somewhere Nowhere”. This is their first self-released endeavor. In the past I’ve admittedly been a casual listener, so let’s see if this new record’s dramatic departure surprises you as much as it surprised me…

This Album Sounds Like: Hundredth went to drop LSD with the spider monkeys while listening to nothing but The Cure and The Neighbourhood. Last I remember this was a Melodic Hardcore band so pressing play on this album was quite a surprise to me. I had to put it down and do a mental adjustment to come back listening to this as a New Wave / Pop / Rock album rather than a Hardcore record. As a result, I also went back to revisit some of their previous work and the transition isn’t as drastic as it was for my first impression. Their album “RARE” certainly started heading in this direction so this seems like a natural step for the band – even if it was completely jarring for me. This isn’t our usual fare on The Circle Pit but I think it can be cool for what it is.

Some Favorite Tracks: “Cauterize”, “Leave Yourself”, “Bottle It Up”, “Whatever”, “Iridescent”, “Out of Sight”

Positives: I found some of the arrangements to be pretty damn dreamy and enjoyable. Hundredth can certainly hit the right notes when they want to. There are plenty of ear worms strewn across the ground of this record. It can feel like a little beach vacation for your ears with the breezy approach this Myrtle Beach band brings. On the core tracks, I think they stuck the landing of this transition quite well. “I just want to be whatever I want to be” seems to be the mission statement of this record and I can respect that. Despite the wide variety put forth on this record, it feels uniform as an album experience.

Negatives: WAY TOO MANY effects on the vocals to the point that it could be unlistenable. At worst, it sounds like the singer is coming through a wall of TV static and auto-tune with as if they were trying to hide their voice. But a take like “Leave Yourself”, which arguably had the driest vocals on the album, proves there’s nothing to hide. The vocal effects could also lead to aggressive sibilance which was unpleasant on the ears. Some of the more electronic and pop-oriented tracks were underwhelming in my mind though I’m sure others will like them just fine. Needless to say, if you came into this album expecting purely hardcore Hundredth, you will be let down. So approach with an open mind, eh?

In The End… This one is a bit hit or miss for me. I truly enjoyed some of the tracks and will probably revisit them. On the other hand, some are completely forgettable. This is an interesting step in Hundredth’s career and I’m curious to see where they end up going with it next. Ultimately, my mixed feelings on this record land it at a 6 out of 10. With less filler and less vocal shenanigans, I would’ve surely rated it higher. However I’m sure some of you will love it through and through. Give a listen to the tracks across this page and see!