KING PARROT “Holed Up in the Lair” EP Review 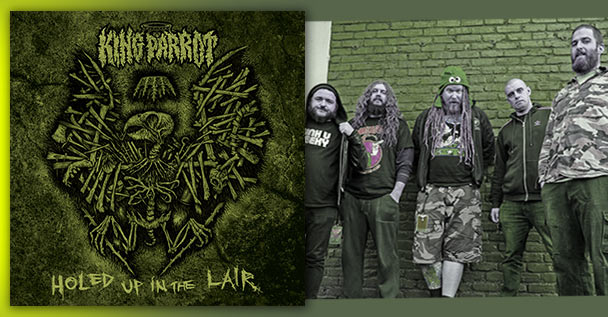 Background: The King Parrot, also known as the Alisterus, is a genus of medium-sized Australasian parrots. It’s also a face slapper of an Australian Grindcore / Thrash band… also hailing from Australia. They’ve been kicking dicks from 10 years now, launching a number of releases in that time. Their latest is a quick bite of an EP called “Holed Up in the Lair” to follow up 2017’s “Ugly Produce”. This five-man band has boasted the same line-up since ’round 2014 with the OG vox, guitarist, and bassist still standing. Now, let’s dig in and see if this parrot deserves a crown.

This EP Sounds Like: a whole keg of beer just being poured all over a baby Alisterus parrot while a janitor stands in the corner sighing. This is a slab of endangered raw meat decaying on a paper plate. To non-metal folk, I’m sure this would qualify as a headache machine.

Some Favorite Tracks: I think all four tracks off or something cool especially on the instrumental side. I figure I’m also obligated to mention the Phil Anselmo feature on the track “Nor Is Yours”.

Positives: The EP ends with a fart… so that’s cool. The band does a good job of bringing an extreme level of energy to the table and I can understand the excitement around this project for that reason. There are cool instrumental moments as the band pitches our ears this way and that. I can certainly give points for creativity. There’s almost a mosh n’ roll element happening here, especially later in the EP. There’s very much a live feel to this record which I can respect.

Negatives: “norisyoursnorisyoursnorisyours…” The vocals didn’t really do it for me on this one. They’re shrill and a bit sloppy. I don’t believe it would be accurate to say this band is sloppy but something about the presentation gives that impression. It all feels banged out and damn this thing is short… only 7 minutes long making if I’m not mistaken but hey, it’s grind time baby.

In The End… If you’re a slow reader, it might have taken more time to read this review than to listen to this EP. It’s not often I find a band to be simultaneously tight and sloppy. I would say they’re tight in practice and sloppy in presentation with this record. I really did enjoy parts of this EP but I don’t imagine I’ll be revisiting it often. On the other hand, I can easily see people loving this thing while throwing their horns and cans of beer into the air. I’m personally feeling a 6.5 out of 10 on the new King Parrot EP. Give a listen through the streams on this page and see what you think for yourself!