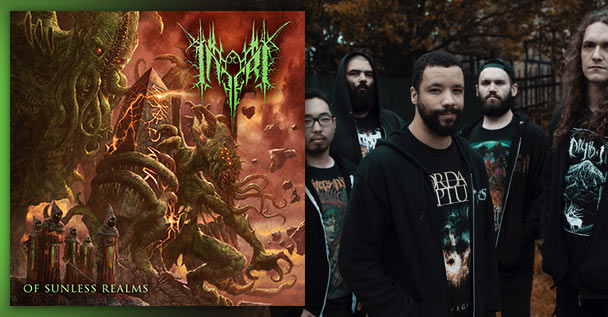 Background: In terms of mythology, Inferi are the collective gods of the Roman underworld. In terms of Harry Potter, Inferi are corpses controlled by dark wizards. In terms of music, Inferi are METAL AS FUCK. For fourteen years, Inferi have been a dominant force in the soundscape of Melodic / Technical Death Metal. They’ve risen from the underground as cream rises to the top with superior musical thinking and all out technical ability. They’ve grown impressively through several releases in that time leading up to their latest EP going by the name “Of Sunless Realms” which was launched through the good people at Artisan Era.

This EP Sounds Like: The shattering of stained-glass windows by nefarious forces beyond our understanding. The scale of this record is like the rising of a H.P. Lovecraft-esque creatures primed to devastate the mortal realm. “Of Sunless Realms” is beautifully executed extreme metal music from front to back.

Some Favorite Tracks: All of them. Period. The onslaught of metal is merely broken by the intermission of “The Summoning” which only serves to make things more epic and thematic on a number like “Aeons Torn”. Much in the same way, “The Abhorrent Art” primes the whole record.

Positives: This is wonderful tasting bite size release from Inferi. Every member of the band brings a standout performance to match and build upon Inferi’s previous releases. The sound is glorious from the ground up and the attention to detail is high. Inferi have progressed as a cohesive musical unit, working together to make every moment of music count. If you’ve enjoyed this band’s previous work, you’ll enjoy this. If you haven’t heard this band before but enjoy metal music, you’ll likely enjoy this. The production is also crispy to match the superior musicianship. It’s really all positives here.

Negatives: Given Inferi’s robust discography, it would be petty to complain about this records length but DAMMIT if it doesn’t leave me wanting more! Exceptionally good job on your first EP to follow up a number of great albums, Inferi. Once again, you’ve lived up to expectations. This is the real deal.

In The End… This brings me great pleasure. We will all bow before the might of Inferi. This is yet another impressive release from an impressive band which stands as a worthy name on the leading edge of Melodic / Technical Death Metal music. As with previous releases from Inferi, I’m feeling a strong 9 out of 10 here. You can listen to metal assault through the streaming links across this page and the EP is currently available wherever music is streamed and beyond.