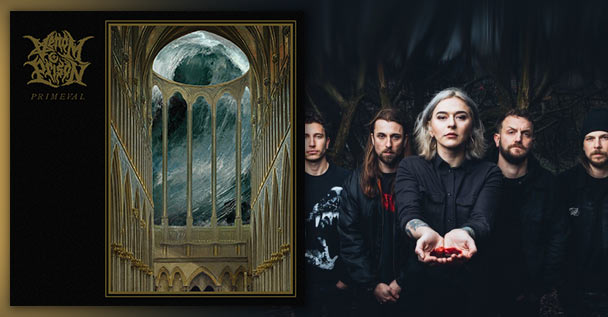 Background: Rising to the forefront of the metal underground from South Wales / Russia comes Venom Prison. They’ve been blending elements of Death Metal and Hardcore music since their inception in 2014. In that time, they’ve now put out a total of 3 full-length albums. They also put out 2 EPs early on which is relevant to their latest “Primeval” which just launched via Prosthetic Records. That’s because “Primeval” is a reincarnation of their EPs “Defy the Tyrant” and “The Primal Chaos” along with 2 new tracks. Let’s get re-incarcerated in this Venom Prison and see how it goes…

This Album Sounds Like: Being subjected to a bloody kick in the ribs (I mean this in a good way, of course). This is a rage filled re-imagining of the band’s previous work that serves as a decent snack to follow the monster that was 2019’s “Samsara”.

Some Favorite Tracks: “Defiant to the Will of God” and “Slayer of Holofernes” show a very promising future direction for the band. The tracks re-created from “Defy the Tyrant” and “The Primal Chaos” also strike quite nicely, amplifying upon their original forms. If you like Extreme Metal, it’s all worthwhile.

Positives: This is a furious collection of music! If you’re looking for some violent, aim-for-the-throat type Death Metal / Hardcore, this should fit the bill. There are definite improvements over the original incarnations of this music as everything seems that much heavier and vicious now. It wouldn’t be a stretch to draw parallels to heavyweights like Napalm Death and Cattle Decapitation at times. There’s also some notable variety and nice, raw production here.

Negatives: Despite changes and improvements, it may have been better to just make a selection of new music instead of re-treading old ground a mere 5 years later… Of course, that’s just my own shitty opinion because the updates are notable after listening to the originals. This isn’t the tightest or most original Extreme Metal effort I’ve heard in recent history but what they do – they do very well.

In The End… I’m feeling a worthy 7 out of 10 on this one. It’s a good record that shows continued promise and direct evolution from this exceptional extreme metal unit. However, after re-visiting the original EPs, it feels more like an intermission or a distraction from what could be than a full course of Venom Prison. Despite that, it’s quite enjoyable and easy to recommend to all the Extreme Metal folks out there! So, give a listen via the streams on this page or through any number of other music platforms.