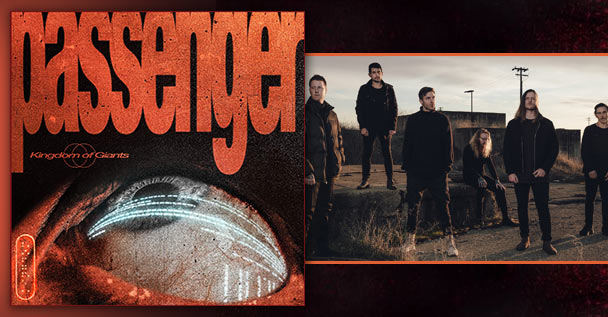 Background: Hailing from northern California (or possibly cyberspace and a tin of pomade) comes Kingdom of Giants. This band has been in business since the year of our lord 2010. In that time, it would appear they’ve released 4 albums of the Metalcore variety. Their latest “Passenger” landed amongst us mortals this past week so let’s give it a spin…

This Album Sounds Like: A Webster’s Dictionary definition of “Generic Metalcore”… this time with cyberpunk synths! This is probably your little cousin’s new favorite band… but he’ll forget about them in a week or so when the next Fortnite concert happens.

Some Favorite Tracks: I didn’t really love any tracks from this record but “The Ride”, “Burner”, “Sleeper” and the single “Wayfinder” were probably my favorites of the bunch.

Positives: Objectively speaking, I can understand why people could enjoy the new Kingdom of Giants LP. It’s bouncy and contains many of the proven Metalcore tropes. The record was well produced in conjunction with the band’s own Dana Willax and Matt Thomas from Ashtone Audio. Other than that, the drummer consistently struck me as the most talented member of the group. It has features from Courtney LaPlante (Spiritbox) & Michael Barr (Volumes) so that’s cool. Overall, the best part of this album would likely have to be the inclusion of the cyberpunk type synths as the differentiating factor.

Negatives: Beyond said cyberpunk synths, there is literally nothing here to make Kingdom of Giants stand out. This band has proven to excel at borrowing elements from other, greater metalcore bands and not executing as well. Out of all the metalcore albums I’ve actually listened to from front to back in 2020, this was probably the most derivative, safe and frankly boring… despite a few pluses.

In The End… At this point of the review, it should come as no surprise this album is not for me. However, it may be for you! That being the case, give a listen to any of the videos across this page. As for me and my shitty opinion… Kingdom of Giants “Passenger” gets a *yawn* 4 out of 10. Maybe they’ll get a bit more creative next time ¯\_(ツ)_/¯