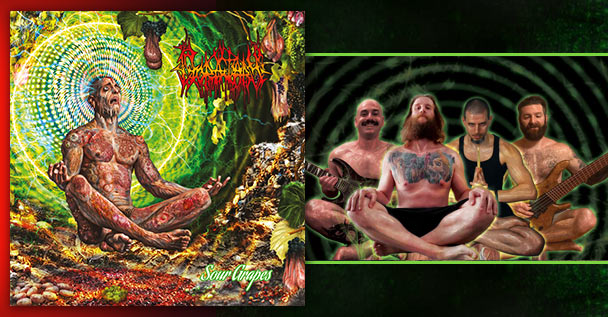 Background: Goratory is an absolute monstrosity in the world of Technical Deathgrind. The line-up features no less than guitarist Alan Glassman (Job For A Cowboy, ex-Despised Icon) and drummer Darren Cesca (Deeds of Flesh, Eschaton) with buddies vocalist Adam Mason and bassist Zac Pappas from Sexcrement. The band has launched a total of four albums over a 20 year run with the latest being “Sour Grapes” through our friends at Everlasting Spew Records. It’s been 16 years since their last album “Rice on Suede”… This band is amazing in that they simultaneously produce such high level musical content while being totally ridiculous and not taking themselves seriously at all. Ball sacks everywhere… Let’s give her a spin, eh?

This Album Sounds Like: If the cover serves as any indication, this would be Deathgrind on ayahuasca? Maybe not but it’s certainly a trip of its own. This is the definition of breakneck speed intertwined with mind-bending musical aptitude. Listening to Goratory is like hopping into a Mandelbrot set made out of razor blades. This is easily among the sharpest extreme metal records to land in 2020.

Some Favorite Tracks: All of them bastards 🤙 Also, let’s be honest and admit “I Shit Your Pants” is a god level song title.

Positives: Frothing, gurgling majesty! This is an incredibly tight, technical, and cohesive musical team making a worthy return. They collectively function as a singular wall of brutality and high-end musicianship making from an impressive exhibition all around. The level of talent is too damn high! Personally, I think this album makes for a great listen while getting work done or just when you want to twist into a stank face. I’ll likely keep it in rotation for those very purposes moving forward.

Negatives: At worst, I would say this album is too short, clocking in at around 26 minutes. However, the BPM is way too high for this thing to run long! The spoken clips between tracks didn’t really add to the experience except to show the band doesn’t take themselves too seriously beyond the craft. Objectively speaking, this won’t be everyone’s cup of blood infused ayahuasca but that leaves more for the rest of us!

In The End… If it’s disgustingly great extreme metal ye seek, you found it! “Sour Grapes” is an impressive effort all around. I’m feeling at least a strong 9 out of 10 testicles on this one… So, there’s a uniballer out there somewhere… To give a listen, hit up any of the streams provided on this page or find the goods on your favorite music platform. G’day!