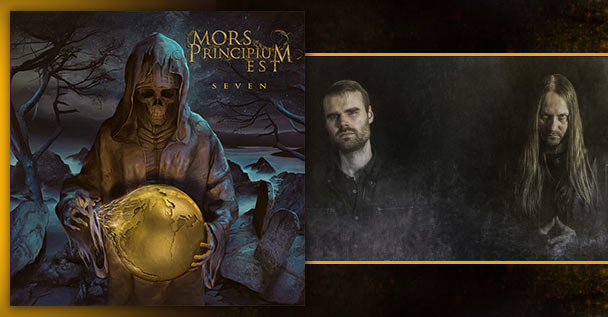 Background: At this point, Finland’s Mors Principium Est has shaved members to stand as a two man band bringing a massive sound! Since 1999, they’ve been responsible for releasing absolutely devastating melodic death metal music, putting out seven full-length records in that time. So, their latest just released through AFM Records, is appropriately titled… wait for it… “Seven”. I’ve often heard of how great this band is but haven’t actually dug into a full record until now. So let’s see how this goes….

This Album Sounds Like: being launched through some fantastical dimension at top speed. This sounds like horns in the air at a metal show. Or maybe this is a night at the renaissance faire or in a basement with your friends playing Dungeons & Dragons. I guess all of this is to say that it sounds like a good, nerdy time to be had by metalheads.

Some Favorite Tracks: The last track on the album “My Grave, My Home” was a thoroughly epic way to close things out. Other stand outs would have to include the single “A Day for Redemption”, “Lost in a Starless Aeon” and “The Everlong Night”. However, if you like the sound on even one of these tracks… give them all a go!

Positives: The musical core of this band is insanely talented. I enjoy the neoclassical elements that they bring with their melodic death metal sound. Every track is a red-taloned monster clawing at the ears. Clearly, a lot of energy and effort went into making “Seven” a reality. I would easily say Mors Principium Est stand at the leading edge of the modern melodic death metal genre. This is quite a collection of impressive metal material that translates well on just about all fronts from the songwriting to the professional presentation to the production.

Negatives: I found some of the synths, VSTs and lyrics to be a bit cheesy. Here and there, the music seemed a bit too digital which makes sense given the nature of being a two man band. Other than that, the production and performance here is great.

In The End… This was one of the better of melodic death metal albums I’ve heard in some time. Mors Principium Est clearly put a lot into this record and it shows. In the end, my enjoyment of this record probably landed around 8 to an 8.5 so let’s just round the bastard up. If you’re looking to dig into the music, you can find some songs from “Seven” across this page and the album is now available at all the usual places you would suspect. Stay metal, my friends.