The legends over at Lambgoat just broke some rather funny metal news via De Telegraaf. Apparently, over in Netherlands, a certain gynecologist has taken great offense to a particular festival flyer and demands that it be removed from the entire city. Why, you ask? Because one of the bands listed on the bill is none other than the infamous Dying Fetus!

As such, he took to the online haven of random thoughts, being Twitter, and exclaimed in Dutch what can be translated to, “Calling on the town of Nijmegen to remove billboards for death metal festivals with band names like ‘Dying Fetus’!” He also has been active around the area trying to bring a halt to the festival’s promotion. 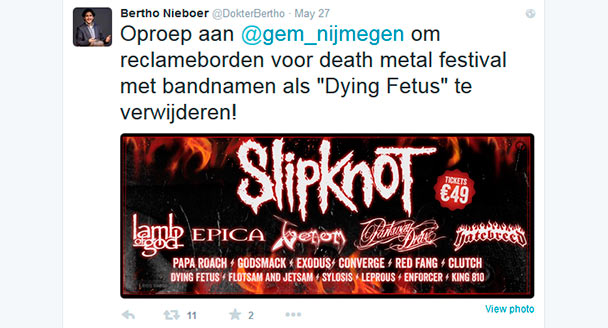 De Telegraaf followed up with the following report, likewise translated through the legendary Lambgoat:

Gynecologist Bertho Nieboer of the Radboudumc hospital in the city of Nijmegen called on the city to remove posters for hard rock festival FortaRock. Nieboer finds it offensive that expectant parents are faced with the name Dying Fetus, one of the bands performing at FortaRock. Nieboer put his complaint on Twitter.

In remarks to newspaper De Gelderlander, the gynecologist says that the unseemly posters are adjacent to the hospital. “If someone like a child is lost, it can be very intense to see that band name so larg. A child lost is very significant,” said Nieboer.

A municipality spokesman, however, told De Gelderlander that is has no control over the posters. Robert Korstanje of FortaRock also points out that Dying Fetus nothing to do with dying fetuses: “I understand the point of Nieboer, but the band name is far down on the poster. Someone who is not interested in the festival will not read it carefully.”

We’ve prepared a special playlist of songs for this man. Enjoy!