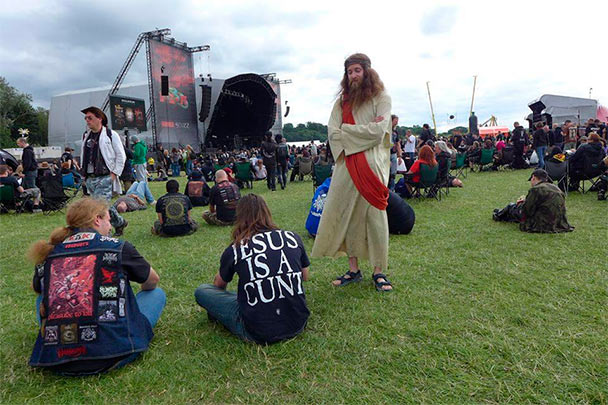 There are a lot of extreme band shirts out there. Whether it be the infamous Cradle of Filth “Jesus is a Cunt” shirt or the many assorted I Declare War designs, some of them are bound to offend the average person – or at least get some reaction out of them. Being a part of the metal community, I’m sure most of us have experienced something like this – whether it be through a friend or the shirts on our own backs.

That being the case, we asked the great people of The Circle Pit to tell us their shirt related stories. And, naturally, we got some pretty good ones. So, without further adieu, here are some extreme band shirt reactions!

I was getting a ticket from a cop for being on a blocked off part of the beach (complete bullshit). I was wearing a Megadeth “Killing is my business… And business is good” shirt. He asked me if I was a gang member / killer and put me in cuffs to check for warrants.

Not so extreme, rather useful actually. Was wearing a Metallica shirt and some Jehovas witnesses skipped me and talked to the next person. Apparently I’m beyond the point of retribution.

on a similar note…

Lamb of God “Walk With Me In Hell” shirt, just happened to be wearing it when 3 Jehovas witnesses came to the door. They looked at me, looked down at my shirt, looked at each other and walked away without saying a word… priceless.

I was selected to go in to the process where they decide whether or not you will be picked as a juror, so I specifically wore a metal blade records hoodie and ripped jeans to come off as a dick who didn’t give a fuck so they wouldn’t pick me. The judge asked me what my sweatshirt said to which I relied Metal blade. He then asked what it was and I elaborated that it was a heavy metal record label. I was not picked to be a juror.

“Oh my god! Is she giving birth!?” To my Cannibal Corpse Wretched Spawn shirt.

I have a Maiden shirt from that chewed up Eddie’s face from The Final Frontier and I’ve seen more than one kid hide behind their dad’s leg while staring my chest in panic, add to that the fact I’m 6’6” tall.

My Venom “Black Metal” shirt seems to drive out the crazies. Had someone try to exorcise me on the bus and another one try to run me over and calling out, “burn in hell, Satanist!”

I was in a bar one time wearing my Bad Religion shirt with the crossbuster logo on it (yes, I’m aware they aren’t metal but it’s the only relevant story I have and it’s still a fairly offensive shirt lol) and some dude walks past me and is like “Hey, I don’t like your shirt” – “Cool, I don’t care”

“Get out” – As I walked in class with my Acacia Strain shirt reading “fuck off and die.” Knockoff of those keep calm shirts.

Was down town wearing my Deicide shirt, on the back it says “Good Old Fashioned Devil Music.” A homeless person on a bike rides past me after reading my shirt and yells “Fuck yeah, good old fashioned devil music!” Not really extreme but that’s the only interesting story I have.

“You are what you represent” as told by a security guard at an art museum, wearing a Morbid Angel- Altars of Madness shirt. I guess she represented being judgmental towards strangers.

I wore a scar symmetry shirt which read “Symmetric in design” on the back to my literary interpretation and analysis course. My professor asked me about it after class, and we talked about it. The next class we had a whole discussion based off of the interpretations that my professor made based off of some of the song lyrics. A whole class day based off of my shirt.

I was asked to stand outside a church because of my “666 Holy War” shirt by Confession. It was planned though.

My “keep calm and piss on the cross” shirt made a few people want to fight me. Great night.

“Bury Your Fucking Dead” on the back of my Bury Your Dead t-shirt (go figure). College professor, “that’s not allowed in school.” Me, “I’m sorry. I graduated high school. This is college. No dress code. Sorry. Also, it’s kinda my 1st amendment, lady.” Next week, found out she was a teacher for my Piano 1 class. Awkward.

I had some stuffy old coot ask me why I felt the need to go around offending people. This turned into his attempt at a lecture on the loss of common decency in the people of today.

I wore a Christian death metal shirt that said “Get Saved or Go to hell” on the back… Got crap for it all day when I was in high school haha – even in the Christian club.

Was wearing an I Declare War shirt with “Eat Pussy, Chug Whiskey, Hail Satan” on the back. And an old hag at the bar said i probably had a small dick lol.

I wore my “White Fucking Chapel” shirt to physical therapy one day and my PT was majorly christian and he was like “Does that really say what I think it says?” me “YEP!”

Granny wanted to cross the street but couldn’t! So i wanted to help her! She saw my shirt (Metallica damage inc.) The look on her face was priceless. I never tought that she could run this fast.

I had a Whitechapel shirt depicting a zombie ripping out another zombie’s spine. A woman and her child walked past me and she covered the kid’s eyes.

My grandmother about 7 years ago to a BMTH shirt that said “I’m knocking on death’s door, but you’re already dead.” She thought it was the epitome of the devil.

I get hard looks from old people when they see the back of this old devil driver shirt. It says “I COULD FUCKING CARE LESS”

“My parents just throw them out.”