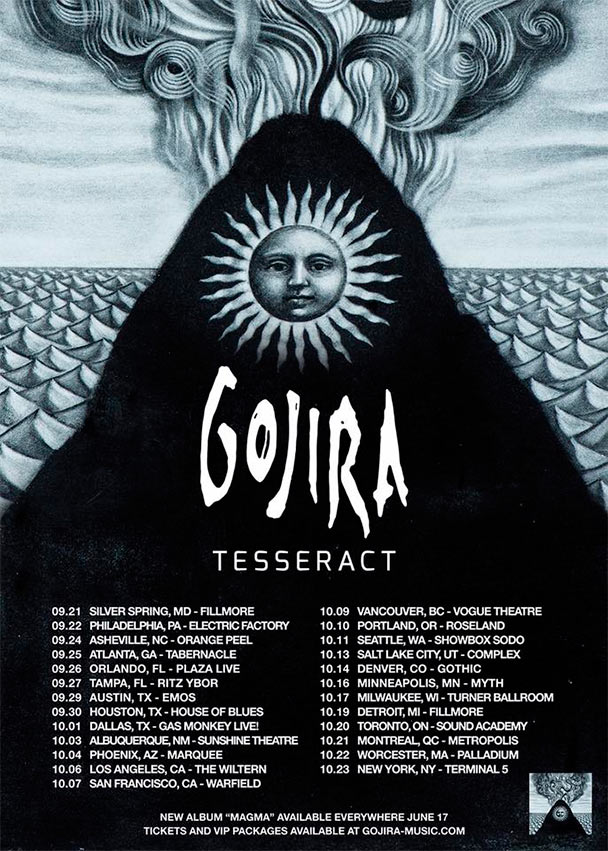 Gojira are currently building towards the release of their highly anticipated, new album “Magma” on June 17th. In support of this, the band just announced a massive, North American headline run which should be the stuff of wonders. In this venture, they’ll be joined by the UK Progressive Metal champions TesseracT. These are, more or less, guaranteed great times waiting to happen so be on the look out! You can find all the dates above and find a snippet of the press release along with music down below.

Roadrunner Records group Gojira have announced details of a massive North American headline tour which will get underway this fall. The nationwide trek will see Gojira joined by Tesseract and is set to kick-off September 21st at Silver Spring, Maryland’s The Fillmore. From there Gojira will traverse North America through October where the tour will eventually wrap up on October 23rd at New York City’s Terminal 5 (tour itinerary below). Presale tickets and VIP packages for all dates will be available beginning Wednesday May 4th at 10:00 AM local time with general onsale beginning Friday, May 6th at 10:00AM local time.

See More: Death Metal, Gojira, Progressive Metal
« The Grindmother Album Released!
The Ghost Inside Drummer – “Back On The Throne!” »