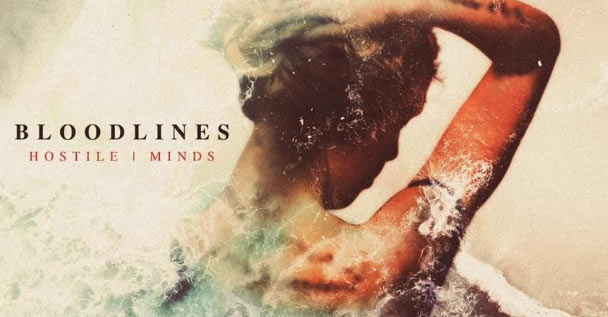 A heavy band is born.

Bloodlines is a traveling troupe of musicians that might just pulverize your vessels with their heavy approach. They do this through a -core / downtempo / groove laden sound worthy of immediate mosh pits. It can get downright nasty at times.

“Hostile | Minds” is the name of their new debut LP which stands as the fully realized follow up to their previous EP and single releases. It puts the band’s for-the-throat sound on display at full volume through a collection of 10 deadly tracks.

If you’d like to give a listen firsthand, the new album is currently available for streaming and purchase through most major online music platforms. This includes the likes of Spotify, Apple Music, and Amazon. They also have merch and physical copies available to those who CLICK HERE.

That being said, let’s trace back the Bloodlines and see how this new album fares on the red seas of modern metal music…

The album begins with an impressive piece of sound design which sounds something akin to entering an arcade and the beginning of a pinball game. Every channel is put to use as the tension rises, begging for some form of catharsis. In the full effect, it’s almost as if the album begins with a flash of innocence before it’s torn away. The transition comes in the form of hard-hitting grooves as the band comes crashing into the frame. This impact sets the tone for the kind of heaviness to expect from the band before more melodic elements begin to bleed into the song.

This is a dark and violent record. With a few exceptions, the music consistently stomps on the sensibilities with massive grooves and dangerous levels of distortion. It’s not a stretch to envision these tracks going over well in a live setting with the consistent cutthroat sound of the music. That brings me to my favorite point about Bloodlines as a band – they’re just plain fun to listen to when you’re looking for something with some weight.

This all continues into the second track “New Age Master” and well beyond. In fact, except for cuts like the fan favorite “End of Days”, the title track interlude, and the album closer “Spiritual Warfare” – the full record is a heavy onslaught. Some of my favorite tracks would have to be “Lineage” which pretty much has a Melodic Hardcore sound (and acts as the sandwich meat with the previous 2 tracks I just mentioned), “Babylon” because it’s the ruthless first exposure I ever had to this band, and “Wrath” with its tight and technical approach. Most of these tracks are worthwhile for one reason or another.

Though, unfortunately, I did enjoy some tracks more than others. For example, “Disconnect” literally was a bit of a disconnect in my ears with kind of a dry trap + metal approach with some almost nu-metal type atmosphere that didn’t quite pan out.

As with the opening track, there are other nice moments of sound design to be found across this record. This is sometimes done as an intro, other times as ambience to line a track, or as a moment to break up or glitch a riff – the delivery is almost always interesting on this front. Take a walk through these “Hostile | Minds” and you will certainly find some creativity.

In terms of concept, this is definitely a Christian band. All the songs are based around faith and the Christian experience with the ups and downs included from that viewpoint. If that appeals to you, you’ll likely feel at home with this record. If it doesn’t, there are still many other elements to enjoy with Bloodlines.

In some ways, it feels like Bloodlines is band capable of filling an I, The Breather sized hole in someone’s heart. At least they’re following in a similar tradition. I just notice similarities to the past band from Bloodlines’ vocals down to the near relentless, groovy, breakdown laden assault for the ears. They also sync up thematically and as I recall – I, The Breather had some interesting moments of sound design as well. I also don’t think it would be a stretch to compare and contrast Bloodlines with older Volumes and Emmure as well. As mentioned, they even can dip into a Melodic Hardcore approach.

In terms of full-length metal albums, this one is surprisingly on the short side falling just shy of a half-hour’s run time. While giving my first listen, I was surprised by how quickly it went by considering the LP has 10 tracks. That being said, most of the tracks on “Hostile | Minds” land around the 3-minute mark.

When it comes to production, this album can waver a bit. While it generally sounds like a huge record with some incredible effects and ideas set into motion, it can suffer from some muddy sound at times. I wish it was just a tad cleaner / sharper. Regardless, every instrument comes through to pulverize the senses just the same – it certainly gets the message across. Also, some of the breakdowns sound noticeably quantized with almost a copy-and-paste effect coming into play.

The only other criticism I have for Bloodlines is that, while they have a very fun sound – it’s not really a sound they can claim as their own. Most elements on this record have been heard many, many times in some form or fashion over time. That being said, Bloodlines are really good at pulling these particular sounds together and strike as professionals in their craft. They’ve chosen their lane, they do it well, and people clearly enjoy it so that’s a win at the end of the day.

Now, let’s view the results of this “Hostile | Minds” dissection. All things considered, this is quite an enjoyable record. At the end of the day, if you’re in the market for some heavy hitting modern -core music with sense enough for nasty impacts, you’ve come to the right place by seeking out Bloodlines! They’ve done a really good job of delivering just that. So, despite any setbacks, I’m feeling a strong 7 out of 10 on this one. Very good, Bloodlines. Very good.

Once again, the new album is currently available for purchase and streaming on the likes of Spotify, Apple Music, and Amazon among other locations. They also have some nice-looking merch and physical copies available to those who CLICK HERE.

That brings us to the end of this particular bloodline. Hope you all enjoy the music and have a good day!