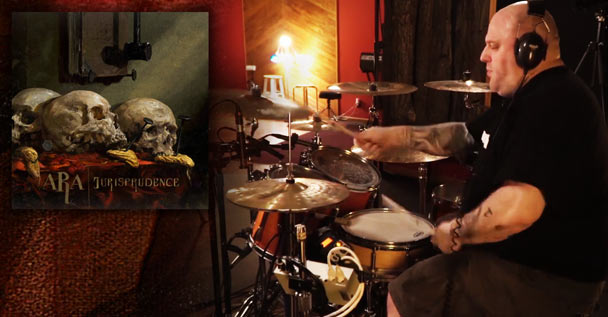 From their new album. Jurisprudence. Which dropped on May 15th.

Every so often, a band comes along that generates praise and attention for all the right reasons, and not always due to having a label or heavy marketing power behind them. Wisconsin-based dissonant technical death metal outfit Ara has already achieved that with their completely independently released 2012 EP, The Blessed Sleep, and 2014 debut album, Devourer of Worlds.

Devourer of Worlds was an effort rightly lauded far and wide not just by extreme death metal fans, but also by writers at outlets such as Toilet Ov Hell, Dead Rhetoric, No Clean Singing, and many more. The group generated massive buzz purely off the strength of their innovative music then, and are finally ready to return in 2020 with a worthy follow up in the form of Jurisprudence. For those new to the group, 3/4th’s of Ara play in the sludge metal/post-rock band Northless who are signed to Gilead Media.

Jurisprudence will be the group’s second full-length and is set for release on Friday, May 15th. Although it could be argued that the modern dissonant death metal trend has crested by now, groups such as Ara have much to say and explore within this territory that few if any of their contemporary peers have achieved on a level as brilliant as Jurisprudence showcases with seeming ease.

Simultaneously mind-bogglingly complex, savagely brutal, and driven by atypical technical melodic death metal ideas inspired by Anata, Jurisprudence is neither typical fare nor easy to peg as simply one form of death metal at even given point of the release.

Ara – Jurisprudence will strongly appeal to fans of groups who the band cite as sources of inspiration which includes Anata, Cryptopsy, Suffocation, and Deeds of Flesh

Ara comments on the upcoming release of Jurisprudence

“This is easily our most cohesive material to date while at the same time most challenging, and great care was given to preserve songwriting integrity while still confronting the limitations of the genre.Â We purposely dialed back some of the otherworldly elements of the last record and focused on an organic approach rooted in a more terrestrial soundscape. This enabled us to regain a relationship with more conceivable elements of tragedy and horror while still expanding on human revulsion to them and existence in general.”

8. Pounded Into the Multiverse