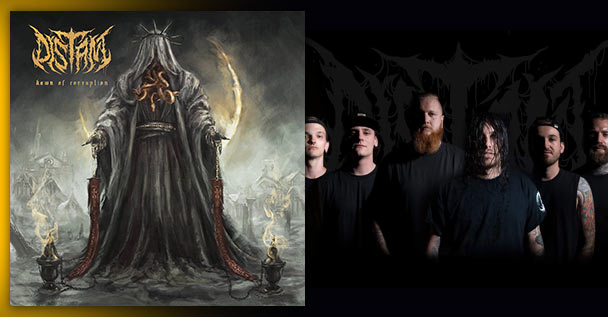 Background: Distant is a disgustingly heavy Deathcore / Slam band making themselves known in an international connection from Rotterdam, The Netherlands to Bratislava, Slovakia. They’ve been steamrolling out heavy music since 2014 and landed themselves a spot with the mighty Unique Leader Records where they launched a debut full-length “Tyrannotophia” last year. This year, they descend back into their conceptual kingdom of Tyrannotophia with an all new EP release “Dawn of Corruption” which is set to strike the world on October 23rd. On this record, they have a few new members in Jan Mato (ex-Shrill Whispers) and Eise Smit (ex-Rising Conflict). They also have some great features from no less than Jason “Slam King” Evans of Ingested and Mendel bij de Leij, former guitarist of Aborted and all around genius. With all that being said, welcome back to Tyrannotophia… We hope you enjoy your stay…

This EP Sounds Like: Being crushed in the obsidian depths of an oceanic trench where only the most decrepit creatures can withstand the gravity. Listening to this EP is like going to the gym and having every weight in the building stacked on top of you. It’s the sound of a permanent stank face. THE DAMN STANK ON THIS THING.

Some Favorite Tracks: Obviously, I have to mention the features again… with Jason Evans on the title track and Mendel bij de Leij on “Temple Of Taglaroth” (probably my favorite on the record). Being an EP, there are only 6 tracks all together and I think they’re all worthwhile for one reason or another so give the whole thing a spin if disgustingly heavy Deathcore music strikes your fancy.

Positives: This record sounds unfathomably massive at times. Crushing walls of sound round every corner of this effort and will truly test your sound system. One of my favorite parts of this record is just how well produced it is. The clear sound and horrifying, ominous atmosphere surrounding these tracks translate gloriously. Every member puts forward a good performance that will twist faces into shades of delightful disgust at the sheer overpowering heaviness of it all. From the varied vocals up top to the chunky bass and slamming drums below with the meaty of strings between, one can safely expect nasty things to come out of a listening session with “Dawn Of Corruption”. STANK. Also, just to circle back real quick, the atmosphere backing these tracks is absolutely nightmare worthy. Sweet dreams…


Negatives: As enjoyable as this record is, it’s not the most original in its field. You can hear just about all the influence coming from other bands who’ve made similar and arguably better music before Distant struck. Also, as excellent as the production is, it can feel a bit too edited at times leading to a copy-and-paste / made in the box effect at times. There’s also always the positive / negative pitfall of an enjoyable EP because it leaves you wanting more with the short run-time. So let’s enjoy what we have here and see where Distant takes us next!

In The End… Distant did a good job with “Dawn Of Corruption” which serves as a worthy follow up to last year’s “Tyrannotophia”. It hits hard in the ways that count for a Deathcore record and some. While not being the most innovative from the field, it’s a real fun listen that I’ve kept in rotation over the past week or so. When all is said and done, my verdict for the latest Distant effort is a strong 7 out of 10. Keep your eyes out for the official release of this beast and sample the singles across this page!