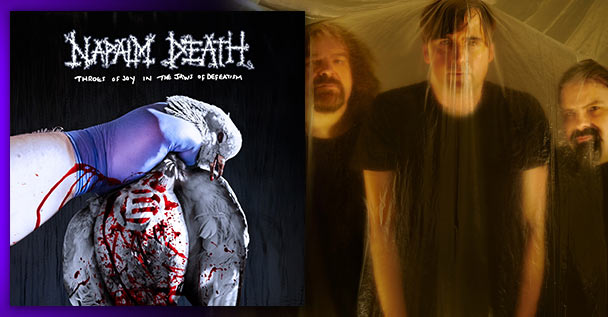 Background: Kings of the grind Napalm Death have been dealing abrasive delights for over 30 years now! They’ve been a mainstay in extreme metal ever since their debut full-length “Scum” in ’87. Since that time, they’ve crafted no less than 16 albums (including the aforementioned “Scum”) with their latest being “Throes Of Joy In The Jaws Of Defeatism” which just launched today! This is their first full-length effort since the might of 2015’s “Apex Predator – Easy Meat”. Though the idea of a Grindcore full-length may seem contradictory to some given the often humorously short length of tracks, Napalm Death have been known to offer up solid slabs of metal with the new record clocking in at over 40 minutes with every track well over 2 minutes – the longest almost being 5!

This Album Sounds Like: At times, this is arguably Napalm Death at their most pissed off. The album sounds like having your face pressed against a red-hot iron and experiencing the agony of your melting flash in a forceful branding. The record seethes at the times and there’s an overflowing of negative energy bubbling from all corners. This comes across as a much-needed release. Perhaps a 5-year release to be more specific. Inherently every Napalm Death record is an angry output but there’s just something that hit different with their most recent offering. This has always been a band with a certain political charge and they clearly had a lot of material to work with on this go-around. You can hear the pure malice with every syllable of Barney’s delivery, with every smack of the drum, and with every pull of the string. It’s awesome. However, the band does lay off the gas at points to venture into more experimental territory making for a diverse and compelling experience from these veterans.

Some Favorite Tracks: “Fuck The Factoid”, the title track, “Contagion”, “Backlash Just Because”, “Joie De Ne Pas Vivre” and “Zero Gravitas Chamber”. Every track has something great to offer listeners on “Throes Of Joy In The Jaws Of Defeatism”.

Positives: As if it’s not abundantly obvious, I enjoyed the ever-living shit out of Napalm Death’s return here. Every member brings about a solid, rage-filled performance. I also enjoy how the record spares no time smacking the listeners with the metal while the band has offered lengthy intro pieces on previous efforts – for example “Multinational Corporations” and the title track on the aforementioned “Scum” and “Apex Predator”. For the most part, this is a great and consistent kick in the face from track to track. However, I did enjoy the band’s steps outside the box on tracks like “Joie De Ne Pas Vivre”, “Amoral” and the unexpected “A Bellyful of Salt and Spleen” single for example. If you’re looking for some beautifully raw and pissed off music, this is it. It’s also worth noting that while the composition itself is hectic, the production comes off very nicely!

Negatives: If there’s any criticism to come around “Throes Of Joy In The Jaws Of Defeatism”, it would have to be derived from one’s own unmet expectations. It’s true that this record drops certain past Napalm Death elements but it’s excellent for what it is and further adds to the already heavyweight discography they’re sitting on.

In The End… This is a solid damn Extreme Metal offering that illustrates continued growth from an already legendary band. You get a lot of what we’ve come to love and expect from Napalm Death along with a few pleasant surprises. To sum things up, I’m feeling a quite superb 9 out of 10 on this one.