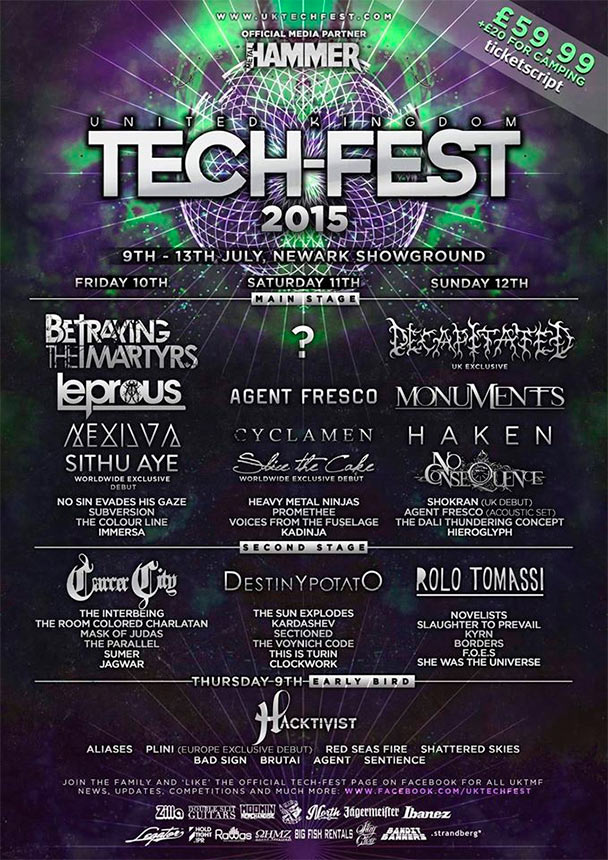 After a period of taunting yet utterly playful teasing the 3rd and final (well almost final, but we’ll come to that soon) announcement is upon us. Brought to you in association with nouvelle sponsors Legator Guitars, Bandit Banners and the legendary, Strandberg guitars.

Leading the charge is Monuments, with their 4th appearance at UKTF. This time around they will be are Under-headliners on Sunday; warming the crowd up ahead of Decapitated.

Also added to the bill are Math-Jazz-punkers Rolo Tomassi, who top the 2nd stage also on Sunday.

Getting a much deserved promotion after a year of intensive hard work are Liverpool’s Carcer City. Who will be making the absolute most of the more prominent position at the head of the 2nd stage list for Friday.

No Consequence also make a return, but this time with their sensational new album Vimana in their arsenal.

Articles elucidating you about the less well known of these bands will be forthcoming in the next few weeks.

There still however remains one solitary mystery. That of the Saturday Headliner, in whose place the curious figure of a question mark still sits.

I’ve heard rumours, but it would be unseemly of me as a man of principle and integrity to validate such spurious talk by printing it.

There is plenty to get excited about in the meantime.