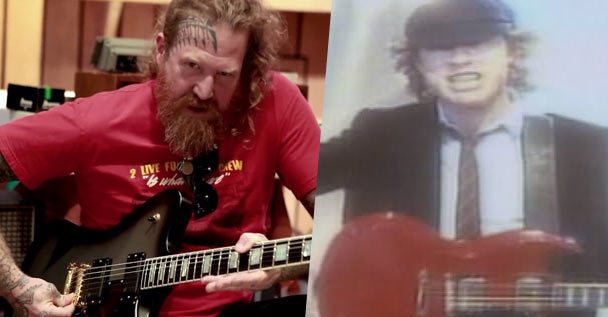 During a recent spot on Dean Delray’s “Let There Be Talk” show, Mastodon’s Brent Hinds shared a funny story of when he first met AC/DC’s Angus Young. You can read it over just below and listen to the full podcast beneath that:

“We were at the Golden God Awards and one of my liaisons was like… I was supposed to take Angus Young to the bathroom. ‘I know you’re a huge fan, take him to the bathroom.’

So I take him, like grab his arm and take him to the bathroom. I was waiting for him and I was like, ‘Hey man, I just want to thank you for your work.’

And he just looks at me like I’ve got shit on my face or something. ‘I wouldn’t be here if it weren’t for you.’ And he said, ‘What are you talking about?’ I’m like, ‘I started playing guitar because of you.’

And he’s like, ‘Quit pissing in my pocket.’ I was like, ‘Fuck you,’ basically. I say, ‘Your pocket is way too far down there to piss in.”

Apparently, there’s an Australian saying “don’t piss in my pocket and tell me it’s raining” which essentially means, “don’t flatter me if you don’t mean it.”

See More: AC/DC, For The Laughs, Mastodon
« As I Lay Dying – first North American tour in 5 years
System Of A Down – Serj speaks further on the band’s current state »