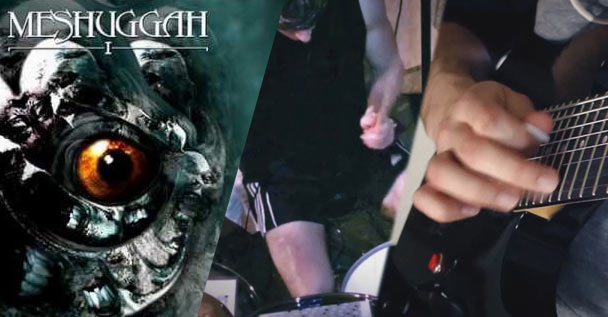 This is impressive to say the least. Multi-instrumentalist Sam Mooradian has collided with drummer Owen McKinley to record a complete cover video for the expansive, nearly 22 minute, legend of a Meshuggah track “I”. They really went to great lengths to pull this off properly and the results show in the final product!

We’ve included both the cover video and the original track below for all your cross comparison needs. Now secure your belongings, strap yourself into your seat, and press that “play” button!

In other recent news, Sam Mooradian is preparing to release a solo EP called “Depression For Breakfast”. Just last week, he released the lead single for this here on The Circle Pit! The man himself describes it as a “dark, melodically crunchy dive into a melting psyche, full of slap guitars and disorienting leads – not to mention a Wilhelm Scream.” You can enjoy that and prepare for what comes next by CLICKING HERE…

Sam himself describes this Meshuggah cover as such:

For the first time since 2004, Meshuggah’s experimental EP “I” has been rerecorded and covered in full. The original release from Meshuggah is NOT in the background here… all 21 minutes of audio in this video was recorded solely by Owen and Sam.