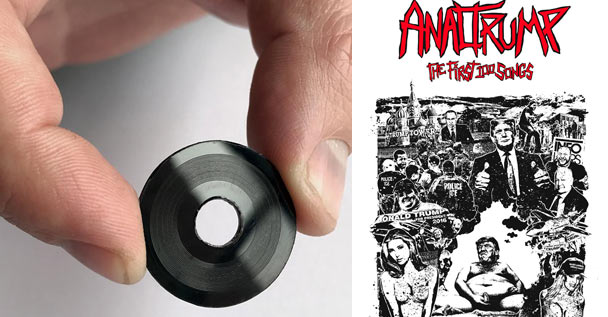 They’ve started up their own S.H.I.T. PAC to raise frunds for organizations that “make Trump shit”. In support of this, they’re selling a $10,000 1″ vinyl record with it’s own specialized record player which is funny all on it’s own. This can be purchased HERE along with a number of other (much cheaper) options.

Here’s what the band had to say about the $10,000 mini-record for their Super PAC:

‘The First 100 Songs’ is out today. And to celebrate Election Day, we are announcing the Deluxe Version of our new album: LIMITED TO ONE SOLITARY COPY ON 100 INDIVIDUAL 1-INCH RECORDS.

The price is $10,000 and proceeds benefit the Super PAC we founded called “So It Has Come To This”.
Purchase includes a modified turntable to play the 1″ records. (*Not for sale to Martin Shkreli)

Here’s the official word in support of the release in general:

A.C. pushed the boundaries of good taste, from their music (which often resembled nothing of the sort) to their logo (which resembled the orifices in their name) to juvenile song titles like “Hitler was a Sensitive Man,” “I Lit Your Baby on Fire,” and “Recycling is Gay.” It’s long been a source of debate whether they were serious or just being offensive for the shock value. Rob feels their appeal lies in that gray area. “They took hate so far beyond everything that all meaning seemed to invert at some point and back again so often that it became impossible to take seriously.” Whatever the intent, they succeeded in horrifying parents everywhere. Anal Trump have one distinct advantage over Seth Putnam’s trailblazing act: whereas Putnam and his collaborators had to come up with their own sleazy subject matter, Rob and Travis have a ready-made supply of parent-offending quotes straight from the Oval Office.

The First 100 Songs pays tribute to classic AxCx album titles like The 110 Song CD and 5643 Song EP. Produced, recorded, mixed, and mastered by Rob Trump, this boasts a hundred songs in eleven minutes — their entire recorded output to date. From 2016’s pre-election That Makes Me Smart! EP all the way through the newer material contained in Thoughts, Prayers, and The Golden Age of Willful Ignorance, this truly exhaustive overview covers all the bases. With songs based on actual quotes by the man (“I Like The Soldiers Who DON’T Get Captured”) to creative interpretations (“My Cabinet Is Nuanced As Shit”) to Putnam-esque bon mots (“Renewable Resources Are Gay”), there’s a smorgasbord of Trumpiliciousness! According to Rob, their material has a universal appeal: “One of the things about this stuff is that, since most of it is taken right from his mouth or ideology, a Trumpster should be fine with it as much as a Bernie person would enjoy laughing at it. It’s just a mirror and that, in itself, is terrifying.”

Rob and Travis Trump aren’t gonna fill your ears with talk of universal healthcare or equal voting rights or any of that socialist stuff — although they donated 100% of the proceeds from their EPs to non-profit organizations like the ACLU and Planned Parenthood. They just want to point out that the most powerful man in the world is a hate-mongering clown, using shrieks and micro-riffs as their chosen vehicle. Anal Trump will soon take this show on the road with help from Justin Trump on bass and John Putin on drums, but as for their future plans? “I just want this ugly chapter of human history to finally be over.”